The poetry of Ryan Dobran begins in a congenial, observational mode and crystallizes swiftly into an engrossing lattice of voice and affect, a prismatic language that pivots unassumingly through shades of the quotidian and the disenchanted, the earnest and the circumspect, the ingenuous and the vatic. It is a recognizably contemporary poetry: familiar discourses and lifeworlds made uncanny by an exacting realism, conscientious of the creaturely and all-too-embodied travails of a rapidly immaterializing modernity, persistently shot through with fleeting glimpses of those distributed, elusively disciplinary forces — of law, finance, technology — that everywhere impinge locally and yet evade global apprehension. At the same time, there is yet something about Dobran’s clear-eyed view out onto the actual existing world that bestows a kind of proleptic clarity on the Skinner box of the present: the poetic defamiliarization at play is not the techno-stunned alienation of modernism but something older and more stoic, comic, or forgiving, not didactic and yet in its composure quietly instructive.

Old Business is a well-turned full-length debut comprising three chapbook-length poems that have previously seen only limited release by small presses in the UK — Story One, The Meritocrat, and The Last Shyness — along with a suite of poems published here for the first time. 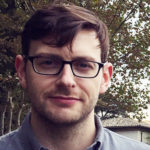 Ryan Dobran lives in Philadelphia. He received his Ph.D. in English from the University of Cambridge. He is the author of the chapbooks The Last Shyness (Face Press, 2017), The Meritocrat (Shit Valley, 2017), and Shouts from OK Glamour (Barque Press, 2013), among others. He is the editor of The Collected Letters of Charles Olson and J. H. Prynne.