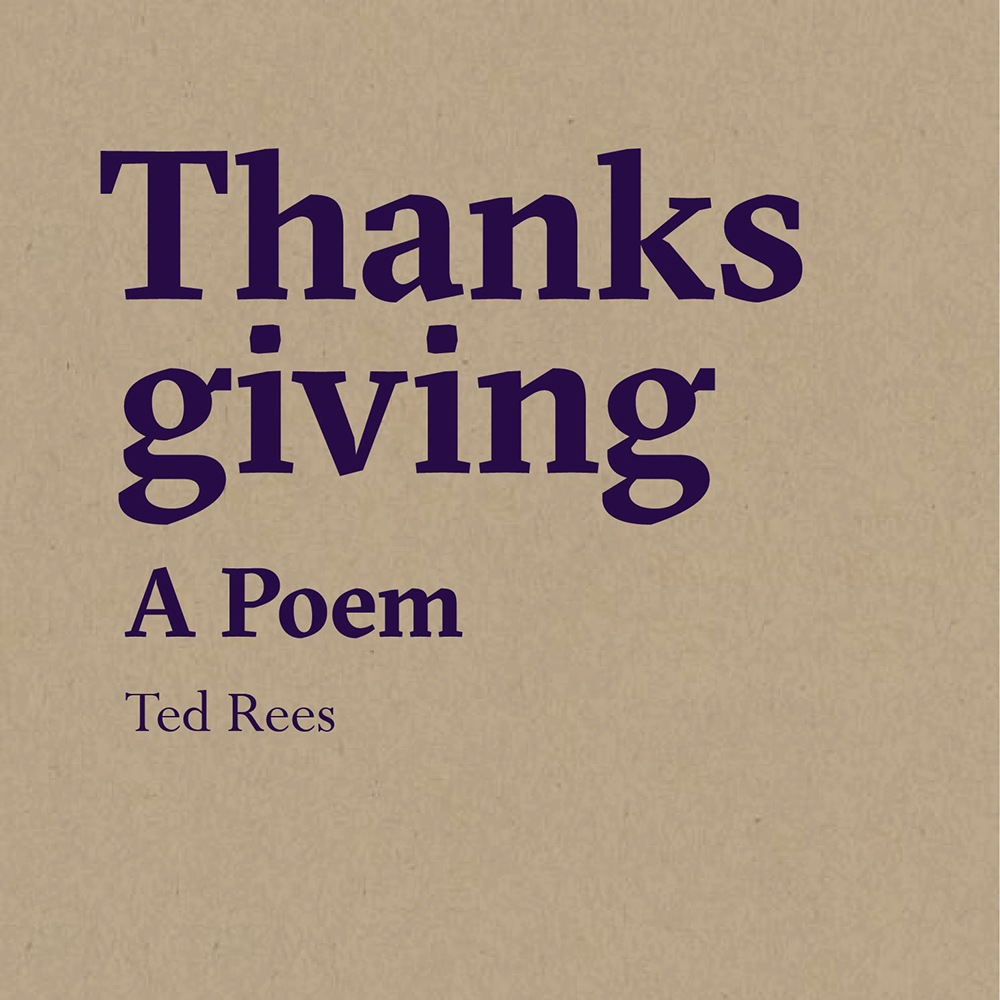 Named for a fast-food sandwich and written during rounds of chemo, Ted Rees’s second book is a poem comprising 498 linked haiku and sent coursing through the “cemetery / Of repressed anguish” that is America. The haiku form, which should dilate into bowers of momentous stillness, succumbs in Rees's narrative extrusion to a torrential historicity: the poem moves at the relentless pace of a police scanner, dream-fed on Cinnabon and petroleum byproducts, a stream of consciousness that is at once revenue stream, live stream, blood stream, click stream, stream dammed to flood and tapped for bottled water. The old transparent eyeball and anaphoric “I” of the pioneer imaginary, profligate as Johnny Appleseed sowing virgin lands with exclamation points, are bounced as trappings of colonial venturing. Rees’s “wild mad” song counters the barbarism of the imperial yawp, burrowing underneath the remote-investment realtyscape of payday loan franchises, strip-mall churches, and detention centers doubling as urgent care clinics. If not precisely hopeful, the poem hints at the isolated prospect of relations running counter to accumulation, of affect eluding capture, of guarded solidarity among those sheltering in the crooks and crannies of blasted overburden: preteen pyros torching lilacs in the dooryard, dropouts lighting out for the backcountry, and militant recusants disappearing into abandoned office parks. Thanksgiving is a queer and delirious poem of making do in the long tail of empire.

"In crystal-like tercets whose measures meld with the substance of song, Ted Rees’s Thanksgiving slashes thru the wreckage of wasted life "to spit on Plymouth Rock" and "the images of extinction" that are its cash-redeemable legacy. “Smacking the void,” or just a "ditch dump for Tyvek," all the ironies of the poem’s purpose — "scour 'til I get to bone" — give way to the sincerities of the singer’s sorrow and rage, longing and love, as the concentrated negativity of our doomed lifeworld explodes in this hex for its transformation."

Clink not to the first Thanksgiving but the last. We cannot afford to be utopian, nor invest any more belief in gloss. Especially the variety that (schm)oozes. In Thanksgiving, Ted Rees busts a full-living load of a poem, processing more than the relation between purely interior and exterior zones. More than between purely dominant and subjugated ties to capitalism’s ongoing "little pukey." At a time when poets capitalise on their image, constantly recuperating the self they purport to destroy, Rees offers a "rough attempt at starting a pit," a receptacle to discard reformed beliefs — perhaps even the "refusal to be discarded" (as Cassandra Troyan writes of Rees’s In Brazen Fontanelle Aflame) — along with the compelling narratives of Empire’s forefathers we love to hate. "I am forgetting / my purpose here’s to spit" it out on repeat, never to chug the poison we’re already injected with, interpellated by. We cannot afford to be "Little Eichmanns" nor stand-ins for actual politics swishing Marxist martinis. It is precisely on the spit of refusal and reproduction where Rees tallies the signs and pours them out: "everything must go."

Ted has put together "Import-Export Shows of Colonial Glory," a playlist of all the songs referenced throughout Thanksgiving, including Kim Carnes's "Bette Davis Eyes," Cameo's "Candy," Notorious B.I.G.'s "Juicy," and 311's "Down," along with some lesser classics like the theme from the after-school teen sitcom California Dreams and a rendition of "Jesus Loves the Little Children" on the brutalist carillon in Springfield, Illinois. Ted Rees is a poet and essayist who lives and works in Philadelphia. His first book, In Brazen Fontanelle Aflame, was released by Timeless, Infinite Light in 2018. His chapbooks include the soft abyss, The New Anchorage, and Outlaws Drift in Every Vehicle of Thought. Recent essays have been published in the Full Stop blog, Full Stop Quarterly, and ON Contemporary Practice’s monograph on New Narrative. With Levi Bentley, he publishes chapbooks under the Asterion Projects moniker. He is editor-at-large for The Elephants and teaches creative writing and literature courses at Temple and area universities.